The Duri oilfield is one of the 141 oil fields operated in Sumatra, Indonesia by PT Chevron Pacific Indonesia under a production sharing contract with the Government of Indonesia. Discovered in 1941, the Duri field is one of the world’s giant oilfields and the biggest steamflood operation located in the Rokan block with peak oil production of 200,000 bpd (31,000 m3 per day). The in-situ formations of the Duri field are unconsolidated sands; coupled with a steam flood operation they are susceptible to producing large quantities of oily viscous fluids as a by-product from the oil production. Up to 400 m3/day (2,500 bpd) of oily viscous fluids are generated at five oil production Central Gathering Stations (CGS) in the Duri oilfield.

Terralog has been operating this project since December, 2002.

From December 2002 to June 2017, the Duri SFI project has disposed of the following waste streams:

The SFI project has now made the Duri oilfield essentially a ‘zero discharge’ oilfield in terms of its OVF waste streams from production operations and a large portion of its waste water.

Terralog has injected all of these wastes back into the deep geologic formation sequence, from where the waste originated (i.e. returned the waste streams to place of origin).

Surface pits used for surface disposal sites have either been closed and/or decommissioned.

Terralog and the client are satisfied with the SFI project performance level and environmental achievements of SFI operations at Duri. 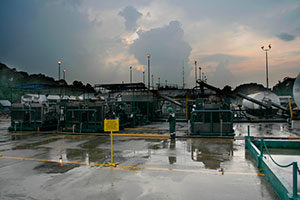