Terralog has expanded its S&E stimulation service to include EGS. The S&E stimulation process is suitable for Stimulated Rock Volume (SRV) development in tight, stiff rock for thermal energy applications:

TTI has proven the success of the Slow & Easy stimulation application for unconventional petroleum resource development. Using this unique experience, TTI is pursuing a global stimulation service for the Enhanced Geothermal Systems industry.

EGS generates geothermal electricity without the need for natural convective hydrothermal resources. Until recently, geothermal power systems have exploited only resources where naturally occurring heat, water, and rock permeability are sufficient to allow energy extraction. However, by far most of geothermal energy within reach of conventional techniques is in dry and impermeable rock. EGS technologies enhance and/or create geothermal resources in this hot dry rock (HDR) through a variety of stimulation methods, including ‘hydraulic stimulation’.**

EGS is the process of injecting water into deep hot rock that has limited fluid content and restricted permeability. If the water is injected at a sufficiently high pressure, this water can ‘stimulate’ the formation by creating a network of complex fractures and ‘enhancing’ the fluid conductivity in situ. Hydraulic fracturing techniques may be used to co-inject proppant to keep the fracture network open. The resultant stimulated rock volume (SRV) can eventually create a geothermal ‘reservoir’ with continued water injection, allowing water to flow through the formation extracting in situ geothermal heat.

A second production well is then drilled into the SRV and the resulting circulation loop brings the hot water to the surface via the production well. At surface the water either flashes to steam or is used to transfer heat to another fluid that produces vapour. This steam or vapour is used to turn a turbine to create electricity. As the final stage in the EGS process, the original produced water is reinjected into the deep hot formation to repeat the geothermal heat extraction cycle. Intermittent stimulation of the rock may be integrated into this cycle to further increase and optimize the SRV development. 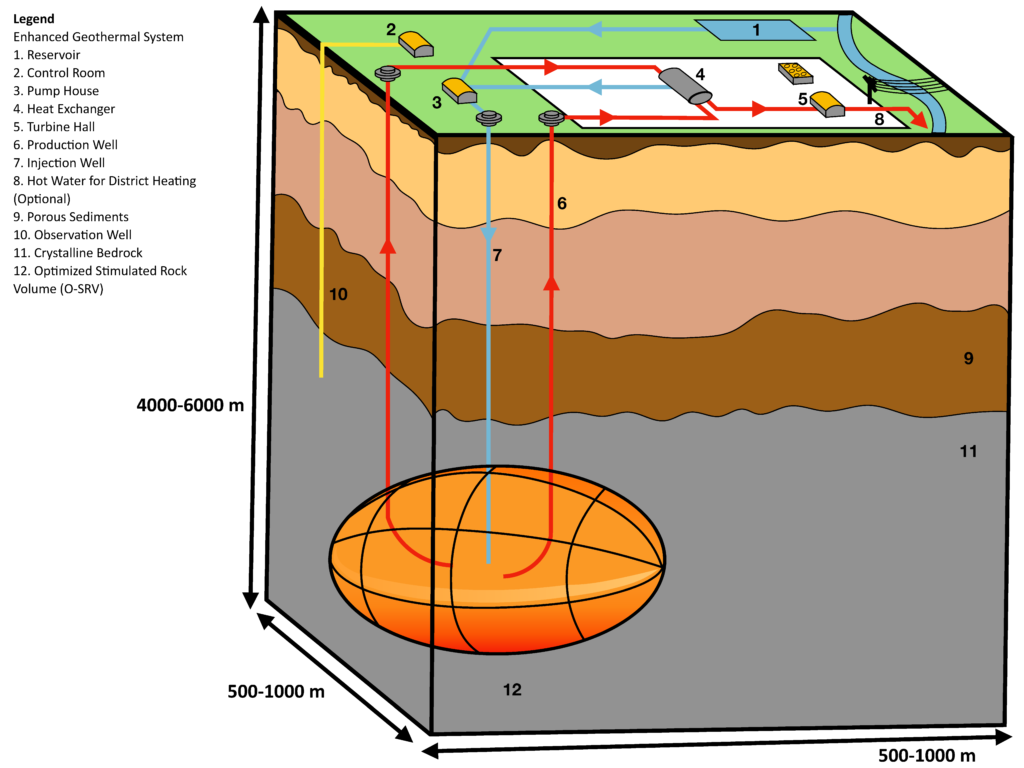